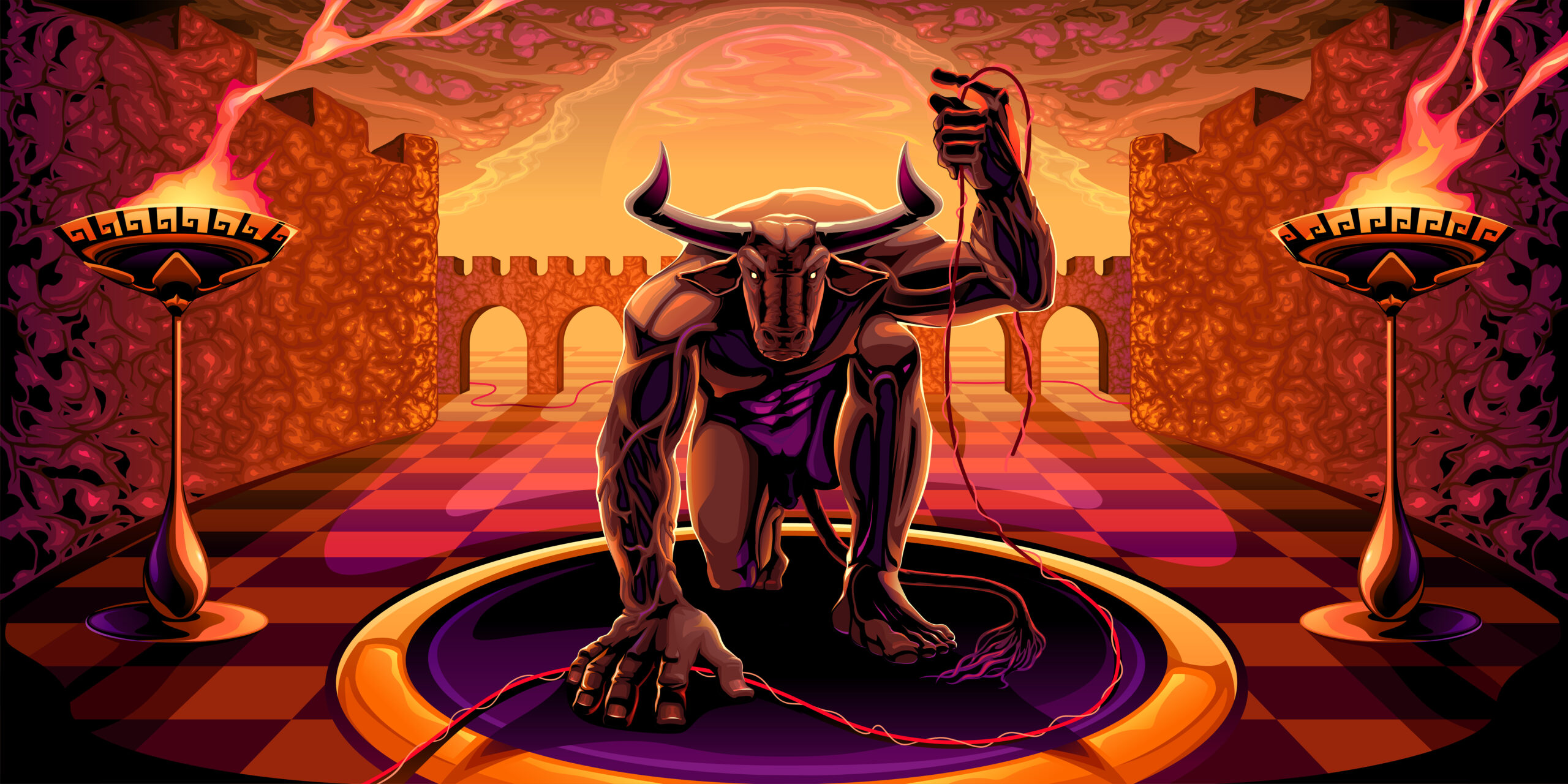 Minotaur in the labyrinth with a filament in his hand. Mythological vector illustration

“Muu, I suppose so. We have a decent amount of meat now, but…”

““You say that, but we’ll never leave this floor if we keep on hunting for meat.””

“Fine, this is a good floor for gathering meat, but it lacks excitement.”

As you may have noticed, I, Mukouda, their supposed master, have no say whether to proceed or not. I’m just extra luggage to them when it comes to dungeon challenge related decisions.

“Shall we head for the Boss Room?” I asked rhetorically.

Naturally, we mow down all the Gigantic Minotaur we saw until we reach the Boss Room. Which was closed.

[8] “Hm? How odd,” I studied the heavy door and tried to push it open. It refused to open no matter what I did, not even with Earth Magic. “Hey, do you think someone’s in there?”

[8] “If they are in there, we have no choice but to wait for the door to open,” Fer grumbled.

[8] “There’s no saying how long the door will stay close after the battle is concluded either,” I sighed.

Indeed, cool-down time is something rather inconvenient, but I guess it can’t be helped. We already had to wait about two hours on one of the floors, who knows how long we’ll have to wait for this one.

[8] “Hmm, well, since we have to wait anyway, there’s no point hanging about here. Let’s keep hunting.”

“Umu, let’s take a break instead and come back here tomorrow.”

I know I said ‘hunting’, but really, I’m basically just the local litter picker. Even so, it was quite tiring picking up Drop items after my familiars, so I was happy to have a break.

As soon as we reached the safe area, I checked my [Item Box].

We don’t have a lot of premade food left since it was all made before we even set out for this trip. While it is unlikely for us to meet encounter too many Adventurers from this point onwards, my familiars like to run through the dungeon as quickly as possible, which meant meal times had to be quick too.

Still, since we took a break early, I have time to make more stuff after dinner.

“Everyone wants Gigantic Minotaur again, right? Should I make Sukiyaki? Well, I want to eat it, so let’s go with that.”

Having decided, I opened up [Net Super] and bought the necessary ingredients for a Sukiyaki, aside from the meat, of course. Let’s see, scallions, Chinese cabbage, fried tofu, shirataki noodles and a few other stuff… hmm, as for the sauce, let’s go with this one. It’s the one I usually use anyway.

Although it is considered red meat, Gigantic Minotaur meat does not have too much fat on it, which makes it a good candidate for Sukiyaki.

[9] After cutting the vegetables to the standard hotpot sizes, cutting the fried tofu into half and slicing up the meat, I melted some Dungeon Beef tallow on a pan. First, grill the scallions a little before pushing them to the side and add the sliced Gigantic Minotaur meat. After the meat had browned a little, add the Sukiyaki sauce straight from the bottle and reduce the heat. Move the meat to the side, it should take up about half the pan, with the grilled scallions taking up 15% of the pan.

Next, add the Chinese cabbage, fried tofu and the shirataki noodles in the remaining spaces. The noodles should not touch the meat, otherwise, the meat would become too hard. At least, that’s what I have always been told.

Anyway, once the shallow hotpot started to boil, lower the fire.

I looked around and found the other two huddled together, evil grins on their faces.

“Oi, what are you two doing there? Food’s almost ready.”

“Plotting? What are you two up to now?”

I looked sharply at them, but they were both grinning at me, trying to look innocent. I sighed, “Whatever, eat first and don’t make trouble for me.”

They were still grinning evilly at each other, but it was not like I have the time to interrogate them. Besides, what kind of trouble could they get into here?

I quickly served up the Sukiyaki onto bowls of rice, cracking a couple of eggs on as topping before handing them out.

“Mu, this smell is familiar.”

“I served it to you before. It’s Sukiyaki, I think I made it with Wyvern meat last time. Minotaur meat seems like a good choice for this dish.”

Well, can’t go wrong with Sukiyaki when I have good meat and good sauce at hand.

My personal Sukiyaki had a lot more rice and a lot less meat. I cracked a single egg on my portion, mixed the runny eggs in with the meat and scooped up a good mouthful of rice, meat and eggs and… delish~~

“Kuuh, delicious! It might be a little low-class but I can’t stop eating it!”

The umami of the meat, the sweetness of the sauce and vegetables, the creaminess of the egg all on a lovely bed of rice…

It might be delicious, but Sukiyaki meat only is a bit…

“”Sounds awesome! I want meat only too!””

“No way, the vegetables would just go to waste if you eat like that. I’ll give you less vegetables, alright?”

They grumbled, but I maintained my stance.

“Eat the vegetables, they are delicious too!”

[As for what went on between those two earlier…]

“People who challenge dungeons should be prepared for death.”

“”People who challenge dungeons should stay on floors that match their strength.””

“Stupid people who decide to kill others should be prepared to be killed.”

“Umu, if they haven’t tried to kill our Master… I could have tried using Lightning Magic on the door.”

“Perhaps, according to the magic lines.”

“It’s not like we trap them inside either, kukuku,”

“Oi, what are you two doing there? Food’s almost ready.”

“Nobody said anything about this! Where are all these monsters coming from?! It’s nothing like the reports!” Determined Looking Female Adventurer was looking very terrified as she screamed hysterically at the room in general.

“This is impossible, we have to escape!” Female Elf had already run back on swift feet to the door. However, when she tried to tug and push at the door, it would not move. “It won’t open! It’s not opening!”

“Put your back to it!” Determined Looking Female Adventurer threw herself at the door.

“It’s useless! The door would not open until the fight ends,” Leader shouted. He had not taken his eyes off the Gigantic Minotaurs in front of him.

There were 12 Gigantic Minotaurs in the Boss Room.

Somehow, they had already managed to destroy one Minotaur each. However, it was not without some major sacrifices.

“If we cannot escape, our only hope is to defeat these monsters. For those who wish to leave this place alive, brace yourselves.”

The roars of the Gigantic Minotaurs echoed in the room.

“I’ll kill you, I’ll kill you!” Large Beastman Adventurer howled as he tried to psych himself up. His hands tightened around the handle of his axe.

“I won’t die here! I’ll clear this dungeon and take the honour and money I deserve!” Slender Adventurer with the one-handed sword yelled.

“We’ll definitely survive this. Let’s do it, alright?” Tamer said to the red-furred tiger.

“….. I need to calm down. I won’t die, definitely won’t!” Female Elf took a deep breath as she tried to work out a way to survive the situation.

The Adventurers and the Gigantic Minotaurs collided.

There was an explosive sound of iron clashing against iron, the howls of the monsters mingling with the screams of the Adventurers.

Within the centre of the Boss Room, only four Gigantic Minotaurs remained standing.

[9] Adjusted the cooking method to something that made sense.

[10] The Conspiring Duo scene is a little absurd, but will try to make it make sense.

It was originally done as Fer & Dora-chan speaking to each other via telepathy after Fer said, ‘Oi, oi, he’s looking over here’ and proceeded to outline every single detail of what they did before patching back to Mukouda’s point of view.

I decided to just do the scene from Mukouda’s point of view first before cutting it to an ‘aside’ scene.

Kitchennovel.com has a new Membership System!!

Please click on the table below to check it out~

Naturally, you can still support us through

Although… it’s, um, you only get half the benefits… but, the decision is in your hands!